Adventures With A Pitbull

Finding Joy in the Journey with my dog by my side

On February 17, 2017 I made the best decision of my life. I adopted my dog Serena. I’m so grateful that I thought to take a picture of us that evening because it serves as a

reminder of just how far we’ve come together. When I adopted Serena, I was at the height of my panic attacks. I was beginning to miss work because of how debilitating my panic attacks were. I knew I needed something beyond the medicine I was taking to help me manage my symptoms. I grew up with dogs and a variety of other animals and knew I would want my own dog some day. I knew my parents were effectively using their German Short Hair Nikko in their Counseling  practice. So I decided to adopt a dog in the hopes of training him or her to become my own Therapy or Emotional Support Animal. What I got was the best gift I could’ve ever imagined. It was also one of the challenging things I’ve ever done.  (P.S. This is going to be a REALLY long post.)

After I decided I wanted to adopt a dog, I googled dog rescues in the San Francisco Bay Area. I found a local rescue called Copper’s Dream. What I loved about this rescue is that they fostered all their dogs in people’s homes. It’s typically less stressful for rescued dogs to live in people’s homes than in a big shelter environment. The foster families also get a chance to behavior test the dogs before helping them find their forever homes. At the time I saw the post about Serena, I had already missed the boat on adopting 3 other dogs at another dog rescue. I was a little bummed that those adoptions hadn’t worked out. Looking back, I’m really glad those adoptions fell threw because it led me to finding Serena. I emailed Copper’s Dream Rescue on a Thursday night (2/15/17) after seeing Serena’s picture on their website. She was the perfect size for having in an apartment, had a more mellow temper, and her sad little eyes just spoke to me. Jill at Copper’s Dream rescue emailed me back on Friday, 2/16/17 saying that Serena was still available for adoption and asked if I’d like to meet her. 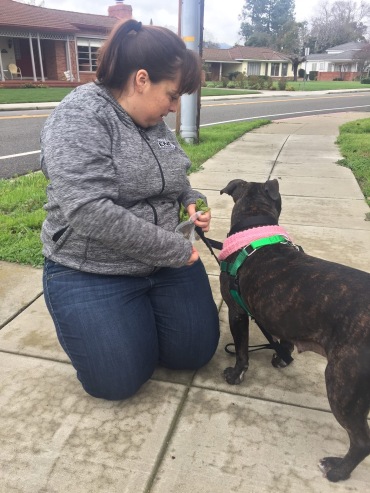 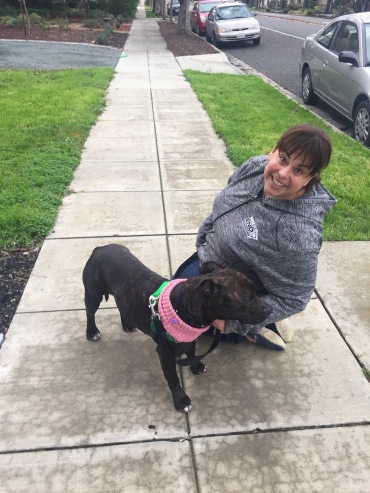 Our first “Walk” on adoption day.

Her Foster Mom was going to take her to an adoption event the next afternoon, but she’d be available to meet me in the morning if I was free. I was  excited and nervous all at the same time! When I said yes to a morning meet and greet, I found out that the foster mom lived literally 1/2 a mile from my apartment. If that’s not a sign from God I don’t know what is. When I walked to the foster Mom’s house the next morning I said a little prayer asking God to help me know if this was the right dog for me. I also started “talking” to my Grandpa Klippenes asking him to give me wisdom. My Gramp was a farmer who had a special touch with animals and the land. I just wanted to know they were both with me as I made this decision. When I walked through the door of the foster mom’s apartment I decided to sit on the floor so that I could put myself on Serena’s level. Serena came right up to me, put her paws around my waist, and laid her head on my heart. It was like she was giving me a hug and she let me hug her for a good couple of minutes. I almost ugly cried in that moment. I knew I was her human, and she was my dog. I took her home later that day and started my new life as a “Dog Mom.” What I didn’t realize until a few months later was that the day I adopted Serena was the 5th Anniversary of my Gramp’s passing. I think my Gramp knew I needed a little something to remember he was still looking out for me.

Adopting a dog is incredibly rewarding and has it’s own set of challenges. After I brought Serena home, I learned just how hard her life had been.  Serena had been found by Animal Control around January 2017. She had recently had a litter of puppies, then was dumped by her previous owner out by Clear Lake, CA. The Animal Control Officers couldn’t find her puppies and assumed that whomever had her before I adopted her, just wanted her for the puppies. She was still showing signs of being a new mama dog. She was definitely thin in places, had a few small bald patches, and her coat was really dull. She was afraid of every little noise outside. I could barely get her to walk 1/2 a block without panicking when she heard a car drive by. She would plant her feet and not move. I got soo excited and cheered for her when we made it to the end of the block! She was perfect inside of my apartment, but really struggled when she was outside of my apartment. I was grateful that her foster mom suggested working with a fantastic Dog Trainer/Behaviorist in the beginning. It made a world of difference having her decode my dogs behavior so that I could build up Serena’s trust in me. There were many days I wanted to give up. It seemed IMPOSSIBLE that my dog would ever grow past her anxiety. In the midst of this, I was being asked to teach my dog how to be brave. While teaching my dog how to be brave, I

found God teaching me how to be brave. The words he would give me to speak to Serena turned into words that my heart needed to hear. The two of us taught each other how to enter the world around us without letting fear and anxiety run the show. On an evening walk four months after I adopted her, Serena all of a sudden decided to pick her head and start prancing in front of me. For 4 months all she did was cower behind me. I had to cajole  her to get her to walk more than a few feet at a time. Now, she was prancing in front of me like she was a “pretty pittie princess.” Now, a year and a half down the line, Serena is a TOTAL extrovert dog. She LOVES PEOPLE (especially men) more than anything in the world.  She will stare people in the eyes and dial the cuteness up to 100 so that she can get attention. She knows she’s cute, and works it within an inch of her life. She has made me so many new friends. I had people in neighborhood near my apartment (that I had never met), come out of their homes and tell me how they had watched me work with Serena. They were amazed by the progress she had made. It was an amazing feeling to come out the other side of this having my hard work noticed.

Having Serena gives me a new purpose in life. I have something to love and care for, and I know that she loves and cares for me too.

When I’m on the floor sobbing from a panic attack, she’s there licking the tears off my face. It’s her way of telling me I’m going to be ok. Her snuggles have been the best medicine when I’m not feeling 100% myself. The simple act of petting her when I’m feeling anxious calms me down without having to take an Ativan.

It’s amazing to me how God has used this small creature to change my life for the better. And I know I’ve changed her life for the better. I feel so much braver moving to Minnesota knowing that I have a little buddy to go along with me. Being Brave & having Courage doesn’t mean your devoid of fear of worry. It just means you’re willing to move forward despite the feelings that chase you. I’m walking confidently forward towards my new adventure with my dog by my side. We’re going to choose adventure and curiosity over fear and worry.

Finding Joy in the Journey with my dog by my side